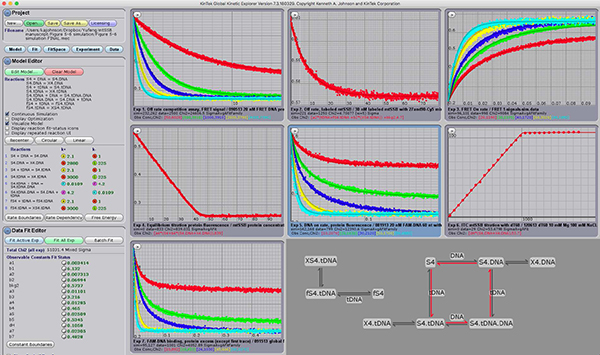 Modern kinetic methods coupled with high resolution structural data provide a powerful tool to establish reaction mechanisms. In this intensive four-day course taught by Dr. Kenneth A. Johnson, modern kinetic analysis using a variety kinetic and equilibrium methods will be detailed using numerous examples on proteins and nucleic acids. The course will focus on developing the path from experimental design to data collection and analysis to yield new mechanistic insights.

In 30+ hours of instruction you will:

A central feature of the course is the use of KinTek Explorer software to learn kinetics and rigorously fit data. Participants will receive a one-month license for the software (for Mac and Windows) to use during and after the course. Tutorials on the use of computer simulation will develop an intuitive understanding of reaction kinetics, and hands-on problem solving will facilitate integration and mastery of the course material.

A complete schedule and detailed breakdown of program content followed by an online registation form can be found below. This information is also available as a downloadable PDF document.

The figure above shows the simultaneous fitting six experiments to define the kinetics and equilibria for the binding of ssDNA to the human mitochondrial ssDNA binding protein. This work was featured as an Editors’ Pick in the Journal of Biological Chemistry, July 2017.

Participants must bring a laptop in order to develop expertise in the use of KinTek Explorer to simulate kinetics. This powerful new tool provides hands-on experience in relating observable kinetic data to underlying models, enabling researchers to pose questions such as: What would the data look like for a given model? Can a proposed experiment distinguish alternative models? Which rate constants are determined by these data? Moreover, KinTek Explorer Software will be used to illustrate the fitting of data by nonlinear regression directly to a model. Fitting data by simulation directly to a model represents a significant paradigm shift that requires the development of some intuition and insight. In this short course we will work to develop that intuition and teach the skills needed for rigorous data analysis. Please familiarize yourself with KinTek Explorer in advance by downloading the free software, watching video tutorials, and reviewing the manual if you have not done so already.

Use the form below to register and pay securely with your credit card, once for each attendee. Registration is limited and early discounts apply. Included in the registration fee: Course materials including a 120 page booklet on kinetics, opening reception, final banquet, and morning/afternoon refreshments and lunch, daily. Cancellations received by 15 November 2019 will receive a full refund.